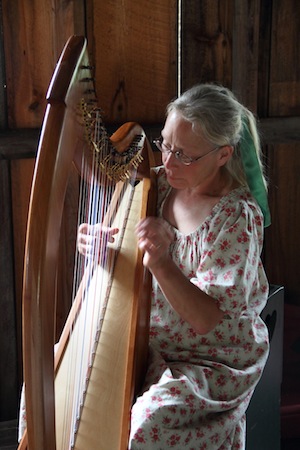 At age six, I wrote my first poem and in fourth grade, I bound my first collection of stories, plays and poems. I consider any conflict, large or small, as a potential story. Because most of my books are based on true incidents, my characters such as in On Viney’s Mountain are gathered from historical records. Other times, family stories inspire a book, like in The Secret of the Red Shoes. I also love to name characters after my friends, as a way to honor them. While I try and write an hour almost every day, working on our organic blueberry farm with my husband, John, tending and preserving a large garden, making goat cheese and other homestead duties absorb much of my time. In the evenings, I play Scottish fiddle tunes on my folk harp, work on quilts and read, preferably with a cat on my lap. For many years, I have tutored or served as a mentor for students in our local elementary school.

On the professional side of life, in 2008, Spalding University awarded me a Master in Fine Arts in Creative Writing with a concentration in Creative Nonfiction. I earned my undergraduate degree in geology from Hope College. My latest novel, On Viney’s Mountain, won the 2010 Friends of American Writers Award for Outstanding Young Adult Novel, represented the State of Tennessee at the 2010 National Book Festival, and appeared on the Bank Street List of the Best Books of 2010. In 2007, my essay Saint George and the Dragon, won the Hearst Prize for Excellence in Literary Nonfiction at the Mayborn Literary Nonfiction Conference.

In addition, my essays have appeared in, The Christian Science Monitor, Michigan History, Farm and Ranch Living, Victoria, Mary Jane’s Farm, Ideals, and Rosebud Magazines, plus the anthologies, Home in the Garden, and Home for Christmas. Each year, I write and record features about our farm for the local NPR affiliate, WMUK, and this year, I also read one of my narratives on Michigan Public Radio. For the past seven years, I have served on the workshop faculty at the Mayborn Literary Nonfiction Conference, and am also a former board member for SCBWI-MI chapter.